apply to the game in Scotland. Scottish Rugby is obliged to adopt the World Rugby Code and to ensure

it is observed by all those who participate in the game within its jurisdiction.

Scottish Rugby’s Code of Conduct shall apply in respect of all clubs, schools, teams, players, coaches, match officials and other persons connected in any way with the game in Scotland.

(1) must ensure that the game is played and conducted in accordance with disciplined and sporting behaviour and acknowledge that it is not sufficient to rely solely upon the match officials to maintain those principles;

(2) shall co-operate in ensuring that the spirit of the Laws of the Game is upheld and refrain from selecting players guilty of foul play;

(3) shall not repeatedly breach the Laws of the Game;

(4) shall accept and observe the authority and decisions of the match officials and all rugby disciplinary bodies;

(5) shall not publish or cause to be published criticism of the manner in which a match official handled a match;

(6) shall not publish or cause to be published criticism of

the manner in which World Rugby, Scottish Rugby or any disciplinary body handled or resolved any dispute or disciplinary matter resulting from a breach of the World Rugby Bye-Laws, the Laws of the Game, World Rugby’s

Regulations Relating to the Game, Scottish Rugby’s National Competition Rules or any other Scottish Rugby Bye-Law, rule, policy or process;

(7) shall not engage in any conduct or any activity on or off the field that may impair public confidence in the honest and orderly conduct of a match, tour, tournament or series of matches (including, but not limited to, the supply of information in relation to the game, directly or indirectly, to bookmakers or to persons who may use such information to their advantage) or in the integrity and good character of any person;

(8) shall not commit a breach of World Rugby Regulation 6 (Wagering);

(9) shall promote the reputation of the game and take all possible steps to prevent it from being brought into disrepute;

(10) shall not commit a doping offence as defined in World Rugby Regulation 21 (Anti-Doping);

(11) shall not abuse, threaten or intimidate any match official, whether on or off the field of play; Scottish Rugby Code of Conduct for the Game (Season2018-19)

(12) shall not use crude, foul or abusive language or gestures towards a match official or spectator;

(13) shall not do anything which is likely to intimidate, offend, insult, humiliate or discriminate against any person on the ground of their religion, race, sex, sexual orientation, colour or national or ethnic origin;

(14) shall not do anything which adversely affects the game of Rugby, Scottish Rugby, any member club or other Union of World Rugby or any commercial partner of the game in Scotland.

(15) shall abide by all other rules, regulations, codes of conduct and policies issued by the Scottish Rugby including inter alia Scottish Rugby’s Child Protection Policy and Concussion Policy

Each club, player, coach, match official and other person connected in any way with the game in Scotland shall be under an obligation to comply with this Code of Conduct.

CODE OF CONDUCT
THE PURPOSE OF THESE CODES
These codes are written for players, coaches, match officials, parents and spectators. They are designed to ensure that all adults involved with the Portobello FP RFC appreciate their role and responsibilities and understand the behaviour expected in Senior, Youth and Mini rugby. The Club wishes players to find enjoyment in their sport and fulfilment of their aspirations in the safe and positive environment which these codes seek to foster.

1. THE GOOD PLAYER’S CODE
AS A PLAYER YOU SHOULD:
Play because you want to do so, not to please coaches or parents.
Remember that skill development, fun and enjoyment are the most important parts of the game.
Be focussed and attentive at all training and coaching sessions.
Work as hard for your team as for yourself – both will then benefit.
Be a sportsman – win or lose – and recognise good play by all players on both teams
Play to the IRB Laws of the Game and accept, without question, all referees decisions.
Control your emotions. Verbal or physical abuse of team mates, opponents, or match officials is unacceptable.
Treat all players as you would like to be treated. Do not abuse, bully or take advantage of any player.
AS A PLAYER YOU ARE ENCOURAGED TO:
Recognise and appreciate the efforts of coaches, parents, match officials and administrators in providing the opportunity for you to play the game and enjoy the rugby environment.
Understand the values of loyalty and commitment to your team, team mates and adults who contribute to it.
Recognise that every other player is entitled to play in a safe and abuse-free rugby environment.
Understand that if any individual or group of young players is not being treated acceptably, then you have a right to tell an adult either at the Club or outside of the game.

Ensure all players are coached in a safe environment, with adequate first aid readily to hand.
Recognise especially that young players should never be exposed to unacceptable risk of injury, nor allowed to train or play when injured nor to face extremes of heat or cold.
Ensure safe and proper supervision of all players, on and off the field.
Develop an awareness of nutrition as part of players education in lifestyle management.
Recognise that it is illegal for players under 18 to drink alcohol or for those under 16 to smoke. By your conduct and example, actively discourage both.
Ensure that your knowledge and coaching techniques are up to date and in line with current trends. Avoid overplaying any player; use a squad system to give every player satisfactory playing time.
Be aware of, and abide by, the policies and procedures which the Club require for Child Protection, the Safety of Young People in Rugby and for young players tours.
AS A COACH YOU SHOULD:
Recognise when coaching the importance of enjoyment for young players and treat all fairly.
Understand that most learning is achieved through doing.
Appreciate the needs of the players before the needs of the sport.
Be a positive role model, encourage young players to behave in all circumstances with dignity and in accordance with the laws and to keep winning and losing in perspective.
Respect referees and their decisions; ensure your players recognise that they must do the same.
Provide positive verbal feedback in a constructive and encouraging manner, to all young players in both coaching sessions and games.

3. THE GOOD MATCH OFFICIALS CODE
AS A MATCH OFFICIAL YOU SHOULD:
Recognise that the safety of players is paramount; before starting play check that the home team has provided a qualified first aider, ambulance access has not been obstructed and that appropriate equipment is available along with someone trained in its use.
Check before training sessions and matches that studs and other clothing are in accordance with the World Rugby Laws of the Game.
Be aware of, and abide by, the Club’s Child Protection and Safety of Young Players policies and procedures.
Officiate to the rules of the Rugby and keep yourself updated on rule updates and amendments..
Be a positive role model; be consistent and objective and always penalise foul play.
Play advantage whenever possible in order to let the game flow.
Explain decisions – young players are still learning and spectators will understand the game better.
Be familiar with the Good Spectators Code and ensure that verbal abuse from players, coaches or spectators is not tolerated and is dealt with appropriately.
Recognise the importance of fun and enjoyment when officiating players, appreciating their needs before those of the sport.
Provide positive verbal feedback in a constructive and encouraging manner during games, emphasising the spirit of the game.
Understand the physical and behavioural development of players and show empathy for the age and ability of players.
Look to self-improvement through participation in training courses.

4. THE GOOD PARENTS CODE
AS A PARENT, GUARDIAN or CARER YOU SHOULD:
Recognise that the safety of players is paramount.
Remember that young people play rugby for their own enjoyment not that of their parents and they learn much, both good and bad, by example.
Encourage but do not force young people to play. Focus on their efforts and be realistic about their abilities; do not push them beyond the level they can achieve.
Respect match officials and encourage young players to do so.
Provide positive support at training and during games; show appreciation of good play by players from every team.
Stay positive: negative messages adversely affect the performance and attitude of players, officials and coaches.
Support the Club’s efforts to rid the game of unacceptable, abusive and violent behaviour.
AS A PARENT, GUARDIAN or CARER YOU ARE ENCOURAGED TO:
Be familiar with the coaching and training programme so that you can ensure that your child is fully involved and that coaches are aware of your child’s availability.
Understand with the teaching and coaching methods used by observing the sessions in which your child participates.
Be aware that the Club has a duty of care and therefore, where appropriate, assist with the supervision of sessions, particularly where numbers are large or where players need transport to away games.
Be involved with Club activities and share your time and expertise.
Share concerns, if you have them, with Club officials.
Be familiar with the Good Coaches Code and support coaches in instilling the virtues it advocates.


5. THE GOOD SPECTATORS CODE
AS A SPECTATOR YOU SHOULD:
Remember people play rugby for their enjoyment not yours.
Acknowledge good individual and team performance from all players of all teams.
Respect match officials decisions. Remember these volunteers provide the opportunity for all to play rugby.
Acknowledge effort and performance rather than the win at all costs ethic; never ridicule any player on any team and verbally encourage all players, irrespective of ability, in a positive way when supporting your team.
Never verbally abuse players, especially young players, match officials, other spectators or coaches. Such behaviour creates a negative environment for players and presents an unacceptable example for them.
AS A SPECTATOR YOU ARE ENCOURAGED TO:
Act as a positive role model to all young players, showing respect for your Club and for the game in your behaviour as a spectator.
Be familiar with, and abide by, the RFU Child Protection and Safety of Young Players guidance in relation to abuse of all kinds.

6. CHILD PROTECTION & SAFEGUARDING VULNERABLE PEOPLE
ALL ADULTS WORKING WITH CHILDREN AND YOUNG PLAYERS IN A RUGBY ENVIRONMENT MUST:
Respect the rights, dignity and worth of every young person with whom they work and treat them equally in the rugby context.
Place their physical and emotional well-being above all other considerations, including the development of performance.
Ensure the relationship that a rugby coach develops with them is based on mutual trust and respect.
Ensure that all activities are appropriate to the age, maturity, experience and ability of young players.
Encourage them to accept responsibility for their own behaviour and performance.
Clarify with the young players (and their parents/guardians) what is expected of them both on and off the rugby field and also what they are entitled to expect from the coach.
Work in partnership with others within the game (officials, doctors, physiotherapists, sports therapists) to ensure the well-being, safety and enjoyment of all young players.
Promote positive aspects of the sport such as fair play. Violations of the Laws of the Game, behaviour contrary to the spirit of the Laws of the Game or relevant regulations and the use of prohibited techniques or substances must never be condoned. 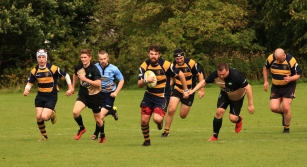