September 8, 2015September 8, 2015
Last Saturday in a galaxy far far away we saw the first combined Portobello / Lismore 2nd XV team face up to Forrester seconds. Having never met each other before let alone train together the Lismore/ Porty introductions took place in the changing room prior to kick off.
As we sorted out positions on the pitch with Lismore full back, Scott Skywalker making his impromptu debut as scrum half and Porty second row player Matt ( Hands So-Low) Wilson taking one for the team by stepping into fly-half (that’s right, fly-half!) the signs looked ominous. The feeling of trepidation increased when the sound of multiple studs clacking on concrete could be heard in the distance as Forrester filed out from the sheds looking like a well-drilled storm trooper unit from the Dark Side flanked by coaches with clip-boards rather than light sabres.
Starting the game with 14 players against 15, the first try went to Forrester straight from kick off. It was going to be a long afternoon. The cavalry soon arrived however, in the shape of the mighty Chewbacca and with 15 against 15 the odds looked a little more favourable. Wilson led from the front carrying the ball down the middle and took the game to Forrester but we couldn’t quite get over the line.
Following another couple of Forrester tries the ethereal voices of Obi Wan Ogilvie and Wan Mare Gin Thomson could be heard permeating the blackness from the touchline. ‘Use the Force’ was replaced with ‘closer support’ and ‘get the ball wide’ as X-Wing Fighter Kieran Thomson stood by waiting to get into the battle. Although the young Padawan didn’t see much of the ball he did himself proud in his first senior match by defending well against the onslaught of a wily and seasoned Forrester back line.
Although defeated this time the Rebel  Alliance fought well, threw every last ounce of energy at the opposition and were rewarded with some well worked tries. With the final score at 52-21 an exhausted but smiling Lismore/ Porty team retired to the changing rooms while the battle cry of the bowed and bloody but not unbeaten (ok..beaten as well) rang out across the Gamma Quadrant of Sector Four. ‘More Port!’ they cried in fevered unison. And MorePort it was.
Stay tuned for the epic sequels throughout the season. 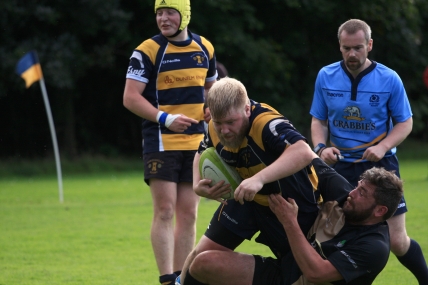